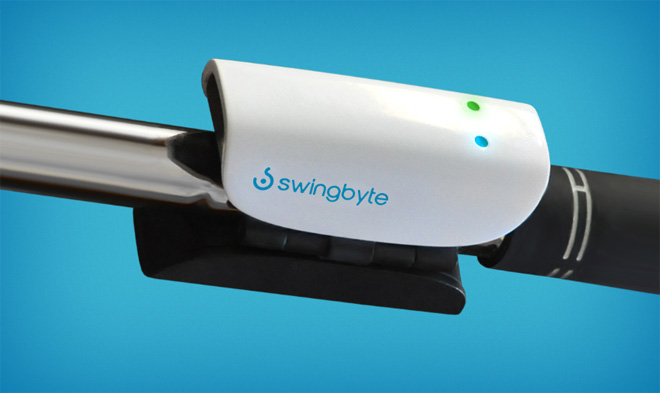 Whether you’re working by yourself or with a golf instructor, a golf swing analyzer can be an invaluable golf training aid to help diagnose and correct problems. Swingbyte just introduced the second generation of their golf swing analyzer, which includes a redesigned lightweight sensor. The product features a new latching mechanism that makes it easier to attach the Swingbyte to any club. It also offers a new alignment aid that allows users to easily orient Swingbyte 2 for consistent data session to session. The new Swingbyte 2 sensor also features a lower profile, an electronic power switch and covert LED lights.

The Swingbyte 2 golf swing analyzer captures key metrics from a golf swing and wirelessly transmits that data and an interactive visual representation of the swing to your smartphone or tablet via Bluetooth. The 3-D golf swing analysis and metrics can be used by the golfer or with the assistance of a PGA instructor.

The new Swingbyte 2 weighs less than one ounce and attaches to any club just below the grip. As the club contacts a ball, the wireless sensor transmits a 3D digital version of the swing to the Swingbyte app. Digitized and video recorded images of the swing – along with measurements of club head speed, swing plane, face angle, loft and lie angles and tempo – can be viewed on smartphones and tablets during practice sessions and archived in the cloud for future reference.

“The new sensor makes the entire user experience with Swingbyte even easier so golfers can improve faster,” said Brian Payne, a former PGA Professional and a Swingbyte co-founder.
Swingbyte’s namesake product, released in April 2012, was hailed by Golf Digest as one of the “12 Coolest Items” at the 2012 PGA Show. Since its introduction, a number of top 100 instructors, including Dr. Jim Suttie, Chris O’Connell, Brad Redding and Kevin Weeks, have joined Swingbyte’s professional advisory board.

Swingbyte also recently unveiled an enhanced 2.0 version of its free mobile app for iPad. New features include the ability to record in-app video that auto-trims unnecessary footage and synchronizes recorded swings to Swingbyte’s 3D visuals and data. The Swingbyte golf training aid now provides golfers and instructors with the unique ability to accurately track the body and club throughout the swing. Both the original model and Swingbyte 2 sensors are compatible with the recently released 2.0 software.

Swingbyte 2 retails for $149 and includes the Swingbyte sensor, the free Swingbyte app and an online account at my.swingbyte.com, which includes additional analytics, community rankings and personal trends.